Precisely one hundred years ago – 19 and 20 July 1916 – the Australian Imperial Force was thrown into its first major battle in France; it has become known at the Battle of Fromelles.

After the evacuation of Australians from Gallipoli, the troops returned to Egypt where a number of battalions were divided up to form the nucleus of a 5th Division of the Australian Army, augmented with newly arrived reinforcements.  Proceeding to France from March to June 1916, Australian units disembarked at Marseilles then wound their way north by troop train and route march to a ‘nursery’ sector in northern France.  Here the old-stagers and new men were in training to fight a different war from the static trench stalemate that had been the experience of Gallipoli veterans.

But the so-called ‘quiet’ sector did not remain that way for long and the Australian 5th Division (who had only disembarked in June) and 61st British Division were ordered to attack the strong German position known as the Sugarloaf salient, with the intention of diverting German troops away from the Somme offensive further to the south.  But any hope of surprise was soon lost as the attack followed a (largely ineffective) seven-hour bombardment of German trenches that merely served to alert the enemy to what might be coming and gave time for counter measures to be put in place.

It was a disaster for the Allies. The British and Australian troops attacked at 6 pm on 19 July.  Fierce fighting resulted in some small territorial gains but these were swiftly reversed by heavy German machine gun fire and a lack of allied flanking support.  By 8 am on 20 July the battle was over.  Australian casualties (killed and wounded) numbered a staggering 5533, while the British recorded 1547.

One among the many killed in action was 26-year-old Major Geoffrey Gordon McCrae of 60 Battalion.[1]  McCrae was popular, intelligent and considered one of the promising young military leaders by his Brigadier, Pompey Elliott, who had known him since 1911 when they had both served in the militia.[2]

McCrae was born on 1 January 1890, son of George Gordon and Augusta Helen (Gussie) McCrae, of “Anchorsfield” Calvin Street, Hawthorn, a suburb of Melbourne.  After Britain announced it was at war, McCrae enlisted on 14 August 1914, leaving the architectural firm, Klingerer and Alsop where he was articled.  His military experience was relatively extensive as he had been part of the reserve forces since September 1909 and by 1914 he was a Captain in 58 Infantry Battalion.

On enlistment his skills were immediately noted and only days later he was appointed Captain in 7 Battalion; the following year he was promoted to Major and the battalion’s second-in-command.  He was wounded in action on the Gallipoli Peninsula, which caused his evacuation to Lemnos, before returning in June only to be slightly wounded again in mid-July.  This time he was evacuated to Alexandria, suffering from shell shock.  Once again he re-joined his battalion on Gallipoli and assumed second-in-command on 30 August 1915.

Posted to 60 Battalion after hospitalisation with enteric fever, he proceeded to France on 29 June 1916 and was commanding the battalion when he was killed in action.  The following day, the Rev. F.P. Williams officiated at his burial in Rue du Bois Military Cemetery, 4 1/2 miles south west of Armentieres.   Many months later his parents received word that Geoffrey Gordon McCrae was mentioned in the despatch of General Sir Douglas Haig for distinguished and gallant services and devotion to duty on more than one occasion.

Generations of the McCrae family worshipped at Anglican Christ Church in Hawthorn , where memorial services were held on 6 August 1916 for Geoffrey McCrae and two other local men: notices of all deaths were received in the same week.   The vicar, the Reverend H. Taylor described them as ‘martyrs for the cause in which they fought – that of freedom, right, and duty, and worthy followers of England’s greatest heroes now at rest with God.’[3]   Major Geoffrey McCrae, Captain Edward Mair and Capt. Harry Ground were friends; all died at Fromelles in July 1916.[4]

In the following months McCrae’s inconsolable father commissioned a memorial window as a tribute to his son from the Melbourne firm, Brooks, Robinson & Co.  He selected St. George, patron saint of England, as its subject in the belief that this exemplar of chivalry and courage would appropriately represent his beloved youngest son, adding a crest at the base with the McCrae motto ‘Fortitudine’ (‘With Fortitude’).[5]  The window was unveiled by family friend Brigadier-General Burston after evensong on Lady Day, 25 March 1917.[6 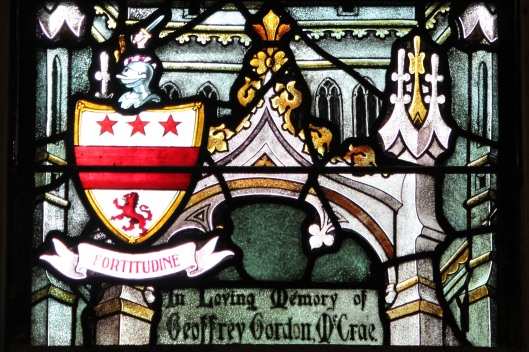 This is just one story of many that might be told of the men who died in that wasteful and little-known battle.  It is only in recent years that ‘Fromelles’ has become known at all, let alone synonymous with one of the worst days for Australian casualties.  In some cases, nearby towns were said to be the place of death.  When the Archbishop of Melbourne unveiled the memorial tablet beneath the McCrae window in December 1917, Armentieres was regarded as the place Geoffrey McCrae lost his life.[7]

At the Australian memorial at Villers-Bretonneux, (the site of a different battle that ended in victory) names of 11 000 men lost with no known grave are listed on the huge expanse of wall at either side of the towering centrepiece.  Above them, at the top of the wall, the names of the battles in which they fought are all carved in stone – all bar one – the Battle of Fromelles.[8]

[1] 60 Battalion casualties numbered 757 – effectively incapacitating the whole battalion which did not reach effective strength again until the following year.

[4] Edward Mair, 58 Battalion, was 36 years old, married to Susan and with two young sons.  He was killed in action only days before the Fromelles battle; Harry Ground, single, aged 30, was wounded on 19 July and died three days later.

[5] The crest does not conform to the McCrae family (a hand in sword or an oak tree).  It may derive from Geoffrey’s mother’s family Brown, of which one branch has a rampart lion as part of its crest.

[8] I am indebted to John Arnold for bringing this to my attention.