A glass painter and maker of stained glass windows in early twentieth-century Sydney, Frederick James Tarrant was responsible for a larger body of work than is immediately apparent.  He was originally from Melbourne where in the 1890s he was head journeyman painter at Hughes and Rogers of Carlton where he had been apprenticed.  There he formed an ongoing friendship with Norman St. Clair Carter who went on to a successful career in Sydney as a portrait painter and stained glass designer and maker.[1]

Tarrant moved to Sydney where he advertised as Tarrant & Anderson in 1898 at 191 Elizabeth Street, near the Great Synagogue.[2]  In 1898 the firm was reported as making a window at the Presbyterian, now Uniting Church, Waverley and the Catholic Church, Wee Waa. The following year he advertised for apprentice ‘Glass Stainers and Art Painters’ for Tarrant & Co., located at 83 William Street, Sydney.[3]  In 1906 he wrote to the Melbourne-based stained glass artist William Montgomery to say he was doing fairly well but had little glass painting work.[4]

The firm expanded with a move to 24 Taylor Street, Darlinghurst around 1913. Tarrant made windows for Norman Carter, the earliest being two 1917 windows for the Presbyterian, now Uniting Church, Neutral Bay. They commemorate an elder of the church who was a sea captain with lively depictions of Viking ships. The windows are signed designed by Carter and painted by Tarrant.  The east window at Christ Church, Queanbeyan (1923) and two windows at St James’ Church, Pitt Town (1928) were made by Tarrant to Carter’s designs. A window depicting the Good Shepherd was made for the Methodist Church, Young (1921).

arrant made a 4-light window for St Stephen’s Church, Willoughby (1911), to a design by J.S. Watkins, a member of the Royal Art Society who ran ‘Wattie’s’ art studio in Sydney. Four depictions of Christ are painted in strong linear style.

Three lights of a 5-light window at St Michael’s Church, Surry Hills, depicting the Good Shepherd (1918) are signed by Tarrant. The outer two lights were much later 1940 additions which are signed by John Ashwin. Three windows with saints at St John’s Church, Darlinghurst (c.1916) have been attributed to Tarrant by stained glass artist and restorer Kevin Little.  A signed window depicting St George at St George’s Church, Hurstville (1918) is a memorial to soldiers who died in World War I. The rich red, magenta and blue complemented by yellow and bright green make an effective colour scheme.

The only interstate windows appear to be those designed by art teacher Amalie Field which were made for St Andrew’s Kirk, Ballarat (1921).  More work was done for regional churches in New South Wales.

The largest number of windows by Tarrant are in the Baptist Church, Auburn (1928), including six lancet nave windows, two triple transept windows a triple-light window above the choir gallery depicting the Christ as the Light of the World, the Sower and Reaper as naturalistic figures with a sense of movement and vibrant colours. Tarrant collaborated with the architect and pastor in selecting subjects for the windows which include Hope and Light of the World.  An unusual arched leadlight skylight framing the sanctuary has the same border pattern as other windows around the words ‘I am the vine ye are the branches’.  It has regular and irregular shapes of textured and opalescent glass, a contrast also seen in his painted windows.

A striking window was made for historic St Luke’s Church, Liverpool. It was dedicated in 1913 and is signed ‘F. Tarrant Stained glass artist Taylor Street Surry Hills’. The bold design and colour scheme emphasise the richly garbed three-quarter figure of a knight in the foreground being blessed by Christ. The knight has a blue suit of armour with gold trim, garland of leaves and a standard with the flag of St George who is usually depicted in armour with a white tunic and red cross. The figures are set in a landscape with water and distant green and brown mountains.

Tarrant’s large-scale work can be seen at All Saints’ Church, Singleton, where he remade Clayton & Bell’s windows from the original church and designed and made an additional two windows (1913). One donated by F.H. Dangar of London is a 5-light window which has Christ holding the banner of Christianity with around thirty figures including apostles, prophets, wise men, crusaders and angels in a sweeping arc below.  Their focus is the Celestial City on a hill to which Christ gestures. An interesting feature of the design is a sole figure in a small boat in the far right panel while the figures occupy the other four panels.

The Masonic Hall in Castlereagh Street, Sydney, was remodelled in 1915 including a dome with masonic symbols in stained glass by F.J. Tarrant.[v] Four windows with symbols of freemasonry and one with the Masonic coat of arms were made for the earlier hall in 1898. The masonic symbols were possibly remade as the border of the dome. When the building was demolished, 24 of the symbols were incorporated into the present Masonic Centre panel by Kevin Little.

A stained-glass ceiling survives intact in the former Bank of NSW building, now retail premises, in Pitt Street, Sydney. Opened in 1913 it has a tiled entrance floor by the well-known Melocco Bros. The ceiling ‘was made by W.F. Tarrant (sic)’.[6] The colouring and glass are similar to the skylight at Auburn, though the design is more delicate. The central focal point is the Advance Australia coat of arms, an unofficial one widely used since the nineteenth century up to 1908. This depiction includes an atypical ox in place of a garb of wheat along with the fleece and sailing ship and an anchor in place of a miner’s pick and axe.

An art nouveau window was made for the former Presbyterian Church, Katoomba, now a café, in 1914.  It has three rectangular panels, the semicircular topped central one with a motif of a particularly lush burning bush set in art nouveau leadlight designs with opalescent glass and bullseyes. Three similar art nouveau panels are between the interior doors to the former church.

Tarrant’s largest church window is the 6-light altar window at Holy Trinity Church, Dulwich Hill (1925) which depicts Christ Feeding the Multitude. The focus is on the five large-scale figures in the four central lights facing inwards while smaller figures in the background represent the multitude.

Bright red, blue and green of garments and landscape are balanced across the design and opalescent glass used for the rocks in the distance adds interest. The composition is framed by bunches of grapes in the tracery above religious symbols and in the lower border. The window is signed Tarrant & Co. Taylor Street. A single lancet window depicting the Baptism of Christ at the rear of the church (1925) is also signed by Tarrant.

As well as stained glass Tarrant designed and painted a tiled mural behind the altar at St Luke’s chapel, Sydney Hospital in Macquarie Street. The mural is signed ‘F. Tarrant, Taylor St Darlinghurst 1913’. It depicts the Good Shepherd rescuing a sheep which has become entangled in a bush. The figure is painted in Tarrant’s strong linear style and the treatment and colouring is reminiscent of nineteenth century religious painting. 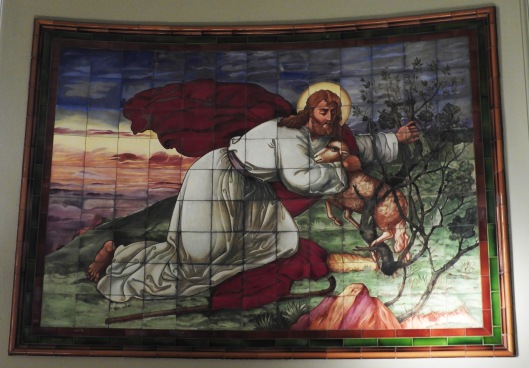 Tarrant’s firm continued into the 1920s but after a few years he advertised glass counters, mirrors and shelves for sale. Two years later, Tarrant and Co. was declared bankrupt and the firm’s contents auctioned.[7] J.C. Chalmers and J.H. Kirkpatrick were named as partners along with Tarrant, who died in 1929.[8]  The firm continued for a time run by his wife Margaret, as evidenced by a window provided for St Aidan’s Church, Lindisfarne (Tas) in 1931, and reported in The Mercury (Hobart), 7 September 1931, p. 3.

Frederick Tarrant’s  work demonstrates the significance of versatility and collaboration to sustain a 30-year career in Sydney.